The Work of Henry Chapman Mercer 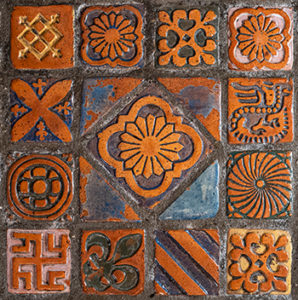 The lovely colored Moravian tiles in the chancel of Saint James are the handiwork of eminent archaeologist Henry Chapman Mercer (1856 – 1930) of Doylestown, PA. He invented a new method of manufacturing tiles for mural decoration and a new process of making mosaics.

Many of the designs for the chancel tiles were copied from the designs on old stove plates. The subjects relate to scriptural scenes and incidents, although some of the designs portray general virtues like wisdom and peace. These handsome, interesting and high colored scenes form a decorative frieze above the altar and along both sides of the apse of the church. 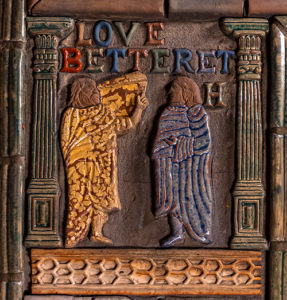 The chancel tiles in Saint James were presented by the church school in 1916. The floor tiles in the aisles were added in 1927, and in 1962 tiles were set in what was then the choir area, and in 2013, the final installation of Moravian floor tiles was completed in the Narthex.