The Clergy at Saint James 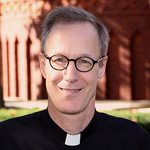 Rev. David W. Peck, Rector
The Rev. David W. Peck is the twenty-third rector of Saint James. Prior to his arrival in 2008 from the United Kingdom, he served the Archbishop of Canterbury, Rowan Williams, at Lambeth Palace as his Secretary for International Development. In this role he focused on building partnerships with church leaders, UN agencies and international non-governmental organizations in order to provide food and education in post-conflict zones in sub-Saharan Africa.

His work in Africa and the Middle East and his completion of a 30-day Ignatian silent retreat at the Jesuit Center in Wernersville, PA drew him more deeply into the practice of contemplative prayer. Since then he has taught meditation in school, hospital, hospice and prison settings. He lives with his wife Dr. Cordelia Moyse, a church historian, and their daughter. Email Fr. David

Rev. Shayna Watson, Associate Rector
The Rev. Shayna J. Watson, was ordained deacon in 2018, then priest in 2019. She served as Canon Pastor at St. Stephen’s Episcopal Cathedral under the leadership of its Dean, The Rev. Dr. Amy D. Welin, before becoming associate rector at Saint James.
Shayna graduated from the University of Pittsburgh in 2002 with a dual major in Political Science and African Diasporic Studies. While she was a student at Pitt, she had the opportunity to study abroad for a semester in a program hosted by The Institute for Shipboard Education: Semester at Sea. During her visits to Japan, China, Vietnam, Malaysia, India, Kenya, South Africa, Brazil and Cuba, she learned to appreciate how God and the Church showed up in various spaces.

She later earned her Master of Divinity with honors from Lancaster Theological Seminary, and an Anglican Studies Diploma from Virginia Theological Seminary. Shayna is a board-certified chaplain, having served in hospital and hospice settings at Penn State Hershey Medical Center and Children’s Hospital, Lancaster General Hospital, and Hospice and Community Care.

Transitioning from the Church of God in Christ to the Episcopal Church has been an enriching experience. Shayna’s experience in the Episcopal Church USA has been one filled with warm hospitality, and she is happy to be in a place where healing through mission and justice is a priority. Shayna believes that wherever the Church is, the people and the land will flourish and have basic needs addressed. In other words, the Church reflects its community, and the community reflects the Church. What matters most to Shayna when preaching is that the message should always address the spiritual needs of hearers, offering comfort, encouragement, love, and a call through highlighting the legacy of Jesus Christ.

Born and raised in Lancaster, PA, to parents who migrated from South Carolina, Shayna has strong work ethics, family values and faithfulness to the Church. Her father was the first African American in his local union and her mother was a union steward. Conversations about safety, bargaining and discriminatory grievances were part of daily life. Shayna, too, wanted to make a difference in the lives of the underrepresented and underserved, and her path to ministry began at the age of 9. Shayna has seven siblings, most of whom serve in the field of human services and community activism. The youngest are 9 and 16.

She is also a community activist, who served as the Religious Affairs Chair for the NAACP Lancaster Branch. She has a track record of organizing community events and fundraisers, offering anti-racism and cultural sensitivity platforms, and developing innovative ways to converse about challenging topics. One of her pastoral passions is to work with veterans and populations who experience post-traumatic stress. At her core is her capacity to network, collaborate and form partnerships with community members, and interfaith groups as well as with audiences who do not find the church safe.

Shayna is also the creator and founder of ΘeoCon (pronounced Thee-Oh-Con): Where Theology Meets Pop Culture Convention, a one-day comic convention-style event, a first of its kind, which began during her Anglican year at Virginia Theological Seminary in 2018. Email Mother Shayna 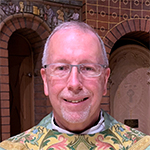 Glenn is a native of Harrisburg and was ordained a priest in the Lutheran tradition in 1986 and licensed in the Episcopal Diocese of Central PA in 2018. Throughout his life before and since ordination, Glenn has had a close connection to the Episcopal tradition and has served in various roles both as a musician and priest in Virginia, Wisconsin and Pennsylvania, most recently as the interim rector of St. John’s in Lancaster.

Prior to the Evangelical Lutheran Church in America (ELCA) and Episcopal Church USA’s formal entrance into full communion, Glenn served on the ELCA ecumenical task force which worked toward that happy and now long-completed goal. Following 16 years of full-time parish ministry, Glenn began what is now nearly two decades in senior church executive positions mainly focused on fundraising. He retired from full-time ministry in the ELCA in 2019 and currently serves as Senior Director of Philanthropy at York College of PA (a college founded by a priest from Saint James!).

Glenn resides in York with his wife Carol. They have two children, a son Jason in Houston, Texas, and a daughter Sarah in Sydney, Australia. Email Fr. Glenn

Pastoral Care and spiritual guidance is also offered through a team of ecumenical, lay and ordained ministers.

Rev. Ronald P. Jaynes
Ronald Jaynes was born in Geneva, New York and grew up in Evanston, Illinois where he attended St. Luke’s Episcopal Church. After graduating from high school, he received his MA degree from Illinois Wesleyan University and earned his master of divinity degree at Nashotah House Seminary, in Nashotah, Wisconsin. In 1966, he was ordained a deacon and priest in the Diocese of Chicago. Rev. Jaynes has served as a parish priest in Sterling, Illinois; Fort Collins and Sterling, Colorado; Little Silver, New Jersey; Wilmington, Delaware and Tampa, Florida.

He has also held positions as interim rector helping parishioners through what is often a difficult time of loss into a time of anticipation of the future. Parishes include Chestnut Hill, Ardmore and Philadelphia, Pennsylvania; La Jolla and Coronado, California and lastly at Bruton Parish Church in Williamsburg, Virginia.

In 2016, Ron celebrated his 50th anniversary as a priest. He keeps busy at Saint James and around the diocese filling in as priest where needed. Ron and his wife Colleen have been married for over 35 years. They have been blessed with four children and a baker’s dozen grandchildren. He also enjoys gardening, attending Philadelphia Orchestra concerts, traveling and reading. Rev. Dr. Randolph T. Riggs
The Rev. Dr. Randolph T. Riggs (Randy) is a native of California who has served for 41 years in four different churches as a pastor in the Presbyterian Church (USA). He came to Lancaster in June of 1996 to be the Senior Pastor at First Presbyterian Church in Downtown, Lancaster. He retired in July, 2012 after 16 years at the church. In retirement he has served Lancaster Theological Seminary as Director of Presbyterian Studies and Community Engagement Liaison and at the Samaritan Counseling Center as a Consultant in Preaching and Ministry. He has served as Bridge Pastor of Slateville and Slate Ridge Presbyterian Churches in Delta, Pa, First United Methodist Church and First Reformed UCC in Lancaster City. He is a graduate of University of California at Santa Barbara (B.A. in History), Princeton Theological Seminary (M.Div.) and San Francisco Theological Seminary (D.Min.)

Randy has been active in the community as well as the Presbytery of Donegal. He served on the Boards of Directors for the Samaritan Counseling Center. He chaired the Capital Campaign for the Food Hub of the Lancaster County Council of Churches as well as the President of the Board of Directors. He was given the Mentzer Award for Excellence in Ecumenical Cooperation in 2012. Randy has two adult children, Holly and Tim, and six granddaughters all of whom are a great source of joy for him.