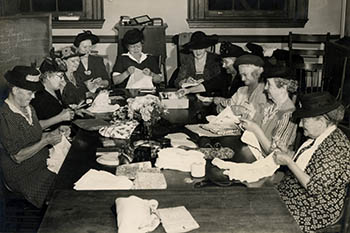 Women were long excluded from positions of power in both the Episcopal Church and wider society. They were largely defined as mothers and wives and were denied the same rights and opportunities as men. But even in a hierarchical and male dominated institution like Saint James, women carved out creative and transforming roles in service to God and others. By the end of the twentieth century however, Saint James women could be found serving in all areas of church life including the ordained ministry of deacons, priests and bishop. 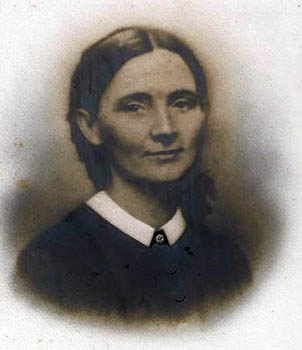 From the mid – 1800s Saint James began to employ professional single women in new ministries designed to meet the growing need for education and the care of vulnerable people. The first manager of Saint James Parochial School (1848) was Hannah K. Benjamin who, after her first year, was asked to run the Orphan Asylum (1838).

For 5 years Margaret Markee, formerly principal of a local secondary school, ran the School’s elementary department. In 1918, during the great influenza epidemic, Margaret Rawn became the first of many women to serve as a parish visitor to the sick, elderly and destitute.

But most female parishioners practiced their faith largely through individual acts of charity or membership in local sewing groups. This changed when new national organizations were formed to harness women’s social networks and domestic abilities as well as to release their entrepreneurial talents for mission. The largest organization was the Women’s Auxiliary (WA), founded in 1871, to support Episcopal women missionaries and teachers at home and abroad. Without Saint James WA members’ efforts and vision, the impressive parish house would not have been completed in 1904. Starting in 1901 the King’s Daughters offered parishioners a rule of life combining spirituality and good works. That same year, the formation of the Altar Guild at Saint James sanctioned women’s presence in a liturgically male-only space. 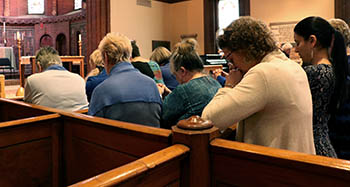 In the second half of the twentieth century ordained ministry and elected positions in church government were finally opened up to women. In 1954 Mrs. Warren Heyberger became the first female member on Saint James’ vestry. In the early seventies women were allowed to stand for General Convention and Anne H. Wohlsen was appointed Saint James’ first female church warden. In 1976 Elizabeth Myers, a deacon at Saint James, became the first woman priest in the Diocese of Central Pennsylvania.

In 2016 Saint James delegates cast their votes for Audrey Scanlan the first female bishop of the Diocese of Central Pennsylvania.