Part of our mission as Christians is to stay informed, understand our world and raise awareness with others so that we may serve more effectively.

We continue to explore how we as a community can learn about other faiths, combat racism in ourselves and engage in conversations with people whose belief systems are very different from ours.

To that end, we collaborate with other like-minded organizations to present seminars, book studies, lectures and experiences that will help create a community of reconcilers, justice-makers and healers. 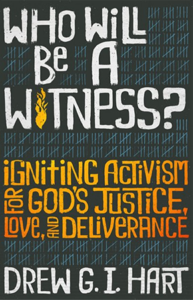 The mission and justice committee at Saint James in collaboration with The Nathan Baxter Chapter of the Union of Black Episcopalians and Religious Affairs of the NAACP Lancaster Branch invite faith communities and the community at large to join this conversation. Drew Hermeling will facilitate the discussions. Author, Dr. Drew I. Hart will join the conversation on Thursday, May 5. All are welcome! 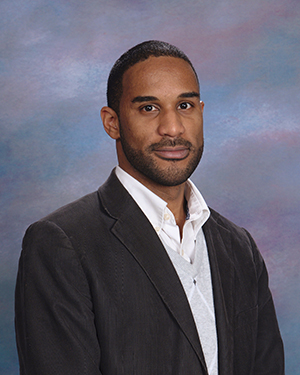 About Drew G. I. Hart

Drew G. I. Hart is an author, activist, and professor in theology in the Bible and Religion department at Messiah University with ten years of pastoral experience. Hart majored in Biblical Studies at Messiah College as an undergrad, he attained his MDiv with an urban concentration from Biblical Theological Seminary, and he received his PhD in theology and ethics from Lutheran Theological Seminary-Philadelphia. Dr. Hart’s dissertation considered how Christian discipleship, as framed by Black theologies and contemporary Anabaptism, gesture the western Church towards untangling the forces of white supremacy and the inertia of western Christendom which have plagued its witness in society for too long. As two traditions that emerged from the underside of violent and oppressive western Christian societies, he found Black theologies and Anabaptism each repeatedly turning to the particularity of Jesus in the gospel narratives, ultimately calling for an ethic of liberation in the Black Church and an ethic of peacemaking in the Anabaptist tradition. Hart finds the practice of reading Jesus not only for the Church, but also against it, to be a vital dimension in salvaging western Christianity from itself. His work beyond teaching and writing has included pastoring in Harrisburg and Philadelphia, working for an inner-city afterschool program for black and brown middle school boys, delivering lectures and leading anti-racism workshops, collaborating with faith-based organizers in his neighborhood, and doing a broad range of public theology. Hart sees his current role as a theology professor as an extension of his ministry vocation that began with pastoral leadership. Trouble I’ve Seen: Changing the Way the Church Views Racism by Drew Hart, was chosen as a 2016 book of the month by Englewood Review of Books. Reviewing the book, Shane Claiborne said, “This book is a gift from the heart of one of the sharpest young theologians in the United States. Hold it carefully, and allow it to transform you–and our blood-stained streets.” As a text, Trouble I’ve Seen utilizes personal and everyday stories, Jesus-shaped theological ethics, and anti-racism frameworks to transform the church’s understanding and witness. Dr. Drew Hart was recently the recipient of bcmPEACE’s 2017 Peacemaker Award for his local and national work. You can find some of Hart’s writing at his blog entitled ‘Taking Jesus Seriously’ which is hosted at The Christian Century or you can catch him as he travels and speaks regularly across the country to colleges, conferences and churches. Drew and Renee, and their three boys (Micah, Dietrich, and Vincent) live in Harrisburg.

A historian of 18th-century North America and teacher focused on historical thinking, cultural studies, and problem-based pedagogy. Adjunct Professor of History and Culture at Messiah College and Teacher of History and Anthropology at Stone School, Lancaster, PA.

Join us for a time of international sharing as we partake of a delicious meal prepared by local refugee families. We'll hear about their journeys from a place they once called home to Lancaster County—why they left, how long it took, what it was like traveling with children, and the difficulties adjusting to a completely new and different culture, language and way of life.

Please use the form below to register for the Bridge Dinner. You do not need a PayPal account to make a payment. You will be given the option to pay as a guest. 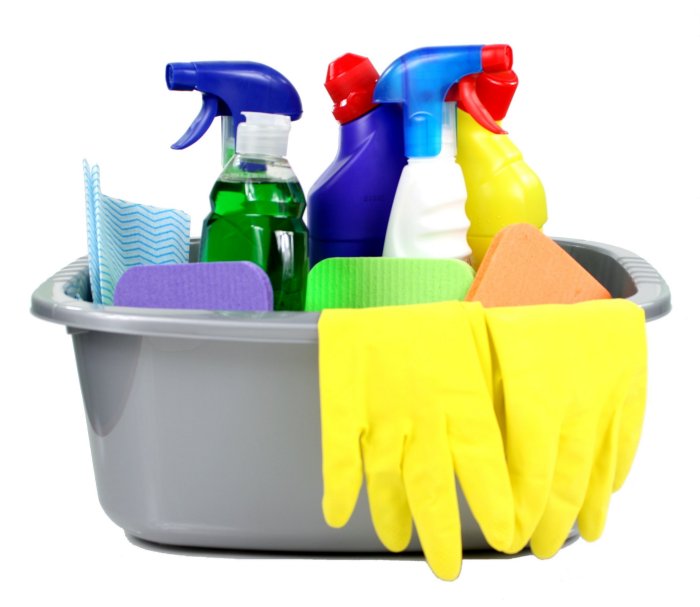 Blessing Buckets
Sponsored in part by Beth Shalom and ALERT*

When women leave prison, they leave with nothing. But in order to be eligible for housing assistance through Beth Shalom, mothers must clean their apartment before they move in and are reunited with their children.

We can help these women get a fresh start by donating Blessing Buckets filled with cleaning supplies. Recommended items include the following:

About Beth Shalom House of Peace
Beth Shalom's mission is to end prison recidivism by providing a comprehensive Christian interim housing program for single mothers leaving prison where they can reunite with their children and be empowered with the skills and opportunities necessary for long-term self-sufficiency. 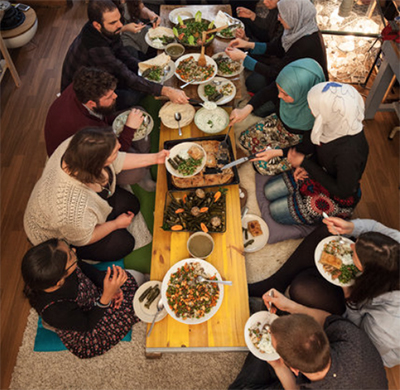 Saint James hosted a second Bridge Dinner on August 4, 2019. It was an evening of international sharing as we enjoyed of a delicious three-course meal prepared by local refugee moms from Somalia and Syria. We heard about their journeys from a place they once called home to Lancaster County—why they left, how long it took, what it was like traveling with children, and the difficulties adjusting to a completely new way of life.

BRIDGE operates as an internet platform where families, businesses, and neighbors can book cultural experiences with refugee families. Every experience connects people to the culture, cuisine, and stories of refugees. Learn more about BRIDGE here.

The Sultan and the Saint 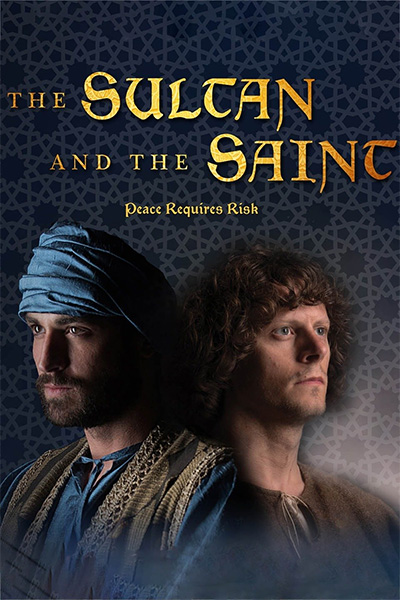 The Sultan and the Saint

June 10, 2018 in the Forum Room/Parish House
The Sultan and The Saint tells one of the great lost stories from history as two men of faith fought against a century of war and distrust in a search for mutual respect and common ground.

The evening began with a simple dinner prior to viewing the DVD. Following the docu-drama, our own Br. David and Fr. Kevin Crinks from St. Mary the Virgin Church led a discussion on exploring how to have difficult conversations with love and spread peace and understanding by acceptance.

About our Discussion Leaders

Fr. Kevin Crinks, OSF serves as priest at St Mary the Virgin Church, Leigh in the Diocese of Manchester, England, having been ordained 25 years. Fr. Kevin has been involved in Franciscan communities for several years and joined the Order of Saint Francis in 2013. He lives in the Vicarage in Leigh, Lancashire with his dog Brian.

Br. David Rutledge, member of our own Saint James Episcopal Church in Lancaster, PA also joined the Order of Saint Frances in 2013 and serves our parish and others by leading daily prayer and being our ALERT liaison. Br. David is currently involved in organizing a mission trip to Puerto Rico. 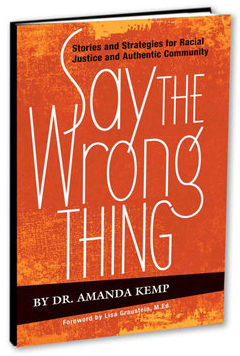 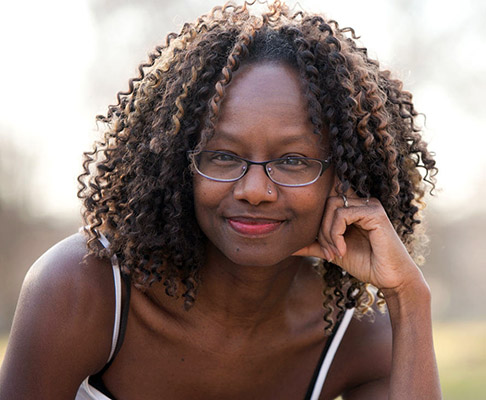 Amanda Kemp graduated from Stanford University and earned a PhD from Northwestern University. She has taught at the university level for over a decade and served as a Pennsylvania Commonwealth Lecturer. The Founder of Theatre for Transformation, Kemp has reached over 25,000 people in her artistic and academic residencies at schools, colleges, and faith gatherings. She is currently touring INSPIRA: The Power of the Spiritual. When not traveling, she resides in Lancaster, PA with her husband violinist Michael Jamanis, their five children and chocolate lab Jake.