In Times of National Conflict

The most divisive war for Saint James was the Revolutionary War. Many members were active in the Patriot cause as combatants or civic leaders: William Atlee, Thomas and Samuel Boude, Edward Hand, Edward Shippen, Jasper Yeates, and George Ross – a signer of the Declaration of Independence.

Others felt it was a civil war between British subjects who were fighting against their neighbors. As rector in 1776, Thomas Barton had been ordained by the Church of England. Because the King was the head of the English church, Barton’s religious vows also required that he maintain his loyalty to the King, despite his love of his American parishioners. As a consequence of such division, the church was closed. In 1778, Barton was escorted to British-occupied New York and died in 1780. The church remained boarded up until 1783.

During the Civil War, parishioners supported the Union cause. At the outbreak of war the Rev. Jacob Isidor Mombert organized the Patriot Daughters of Lancaster to give clothing and rations to volunteers. The same group nursed wounded men after the Battle of Gettysburg. Among Saint James combatants were Colonel Emlen Franklin who led the defense of Lancaster County when the Confederate Army advanced in June 1863 to the Susquehanna River; and Captain Robert M. Jeffries, Company F, 115th Pennsylvania Volunteers, who, aged 21, fell at Petersburg, VA. He is buried in the Saint James churchyard. 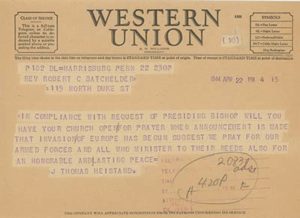 Telegram to the Rev. Robert Batchelder from Bishop J. Thomas Heistand of the Episcopal Diocese of Harrisburg (today known as the Diocese of Central Pennsylvania) April 22 1944, less than two months before the Normandy Invasion. It reads, IN COMPLIANCE WITH REQUEST OF PRESIDING BISHOP WILL YOU HAVE YOUR CHURCH OPEN FOR PRAYER WHEN ANNOUNCEMENT IS MADE THAT INVASION OF EUROPE HAS BEGUN SUGGEST WE PRAY FOR OUR ARMED FORCES AND ALL WHO MINISTER TO THEIR NEEDS ALSO FOR AN HONORABLE AND LASTING PEACE=J THOMAS HEISTAND.”

During World Wars I and II, many parishioners rallied to the Allied Cause either by serving in the military or by volunteering with organizations like the Red Cross and the USO. The church also provided moral and spiritual support to serving members by sending them letters and candy. A war memorial commemorating those who died can be found in the church.

Such collective and individual responses to national crises and human need characterized members’ responses to later wars such as the Korean and Gulf Wars. Saint James, like many communities, was divided over the Vietnam War, although a group called Concerned Lancaster Citizens for Peace was permitted to hold a service in the parish house.

Following the terrorist attacks on the country on September 11, 2001, the parish held services in honor of the dead. In addition, the rector of Saint James, the Rev. Peter Eaton as the head of the downtown ministerium of faith leaders, presided at an interfaith service.