Connecting Beyond the Parish 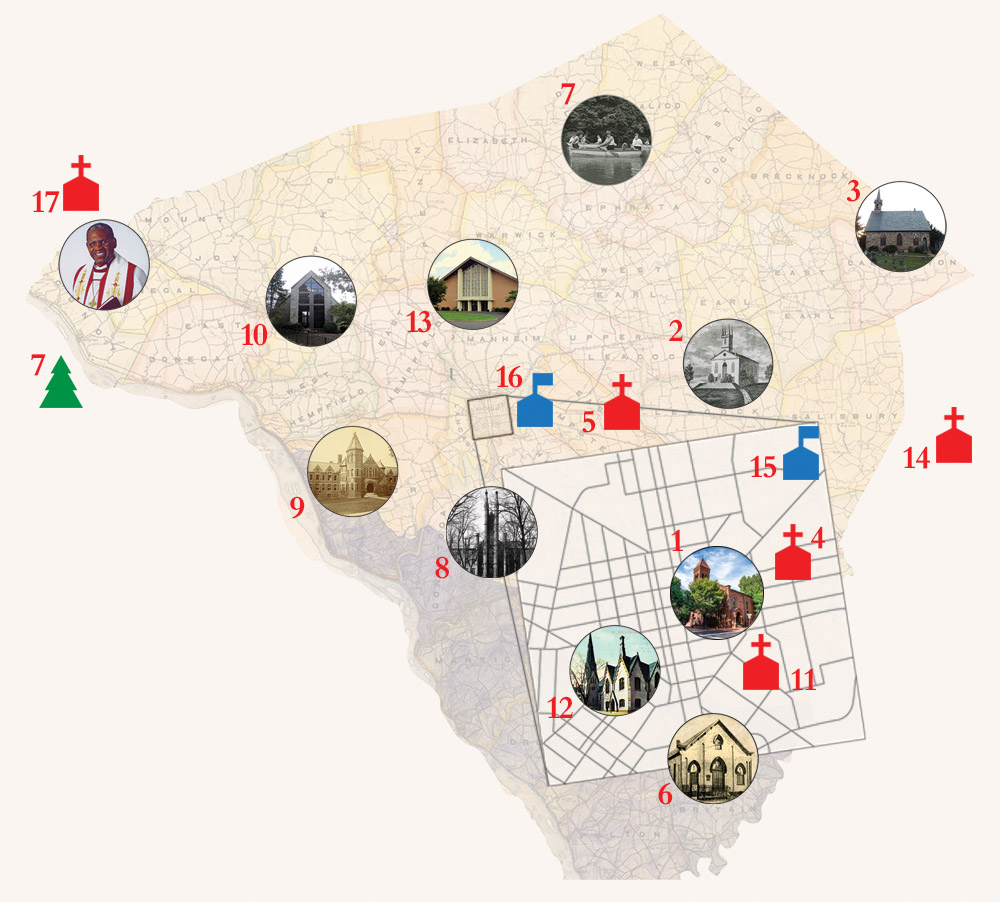 Since its founding, mission, education and outreach have been a part of Saint James. Clergy and parishioners have sought to meet the spiritual and educational needs of Lancastrians and of the surrounding county thus creating and supporting numerous churches and schools in the course of its history—many of which continue to thrive today.

Its first rector was Edward Y. Buchanan, brother of President James Buchanan. Regular Sunday services ended in 1941 due to declining membership. From 1941-1951, the Rev. Robert Batchelder ministered to this congregation as well as Saint James. The church closed in 1953.

Bangor was established by Welsh Anglicans, and the church was built in 1734. The Rev. Richard Locke, a missionary for the Society for the Propagation of the Gospel in Foreign Parts served as Saint James’ first rector while serving the larger congregation of Bangor. Saint James clergy served both churches until 1819.

Inspired by Jesus’ words from the gospel of Matthew, chapter 25, Bishop Bowman Church Home cared for the sick and poor of the parish. Even today income from its invested funds continues to provide care for those with health and financial need in the community.

In 1817, fifty free people of color, including Saint James worshippers, decided at the home of James and Elizabeth Clendenin to establish a separate church for people of African descent in Lancaster. The first house of worship built on Strawberry Street by 1821 was known until the late 1840s as the Saint James African Church. The name Bethel AME was adopted later in the 1880s.

Saint James ran a Sunday School in the southeastern part of the city for a number of years before the Rev. Jacob Isidor Mombert proposed building a mission chapel. On Saturdays the chapel served as a sewing school. On Sundays there was a worship service and a Sunday School for children. The building was sold in 1906 and then was used by the Ebenezer Baptist Church.

The Institute was endowed by Catharine Yeates in memory of her father, the Honorable Jasper Yeates, Judge of the Supreme Court of Pennsylvania. Its purpose was to give young men, such as the Steinman boys who started a communications empire, a classical training for business, university and ordained ministry. In 1899 the school moved from the city to Eshleman Mill along the Lincoln Highway East. The school closed in 1928 after a destructive fire and is now the site of the Lancaster Mennonite High School.

The organist George B. Rodgers started a summer choir camp at Schelle Island to build up fellowship among young choristers with cookouts, swimming and boating. In 1942 the camp was opened to all young people and other Episcopal and local churches. When the camp house burned down in 1956 a new site was purchased near Ephrata. With declining attendance, the site was sold in 1972.

The Rev. Samuel Bowman wanted to establish a church which was not funded by parishioners paying rent for their pews, unlike at Saint James. He personally gave a gift of $1,000 to the project. The new church is said to have been the first free church in the Diocese of Pennsylvania. The Rev. Henry Augustus Coit was assistant minister while teaching classics at Saint James Parochial School before becoming rector at St. Paul’s School, Concord, NH.

In 1823-24 the Rev. William Augustus Muhlenberg started the first regular services in Harrisburg as a mission. In 1932 Saint Stephen’s church became the cathedral for the Episcopal Diocese of Central Pennsylvania to which Saint James belongs. The Rev. Dr. Nathan Baxter, the first African-American rector of Saint James, 2003-2006, then became the 10th bishop of the Episcopal Diocese of Central Pennsylvania, 2006-2014. Our current bishop is Dr. Audrey Scanlan.

The Rev. Joseph Hutchins, the first rector of Saint James (1783-88) after the Revolutionary War, was a trustee of Franklin College when it was founded in 1787. He later served as professor of English language and literature. When Franklin and Marshall Colleges united in 1853, the Rev. Samuel Bowman became a vice-president. In the 1940s, Saint James supported the Canterbury Club started by Episcopal students.

With Lancaster’s population growing and becoming more suburban after WWII, Rector Robert Batchelder believed there needed to be a new Episcopal church. Fifteen families agreed to start an Episcopal mission and rented a building on Eden Road. The church was called “Saint Thomas”, after doubting Thomas in the Bible because many people were doubtful about its success. In 1969 a permanent church building was erected in a residential area along Oregon Pike.

Thomas Burrowes (1805-71) was a Saint James vestryman and State Superintendent of Schools. He was responsible for the 1857 law which led to the establishment of PA’s system of “normal schools” which trained teachers. The Rev. Albert S. Lawrence, Saint James associate rector 1966 – 71, was the driving force behind the establishment of a chaplaincy to minister to students on behalf of all the Protestants churches. He oversaw the appointment of its first chaplain in 1967.

On the border of Chester and Lancaster counties, the Rev. Richard Backhouse, a SPG missionary began ministering to a congregation. The Rev. Richard Locke, a missionary for the same society served as Saint James’ first priest as well as ministering to Saint John’s. Until the late 1820s, Saint James clergy regularly served the congregation of Saint John’s.

The congregation of Saint Edward’s was founded to meet the growing needs of the community in the northwest quadrant of Lancaster. Two Saint James families were among the 35 who started the first congregation. The current church, alongside Harrisburg Pike, was consecrated in 1991.

15 Education for a City
Lancaster, founded in 1822

The Rev. William Augustus Muhlenberg was instrumental in making Lancaster City and incorporated boroughs of the county the second school district of the State when they committed to providing public education for poor children at public expense in 1822. In 1823 the first public school building was built in Lancaster. The School District of Lancaster was created in 1836 when legislation allowed local officials to open publicly supported schools to students regardless of income. J.P. McCaskey, the great educator and Mayor of Lancaster, after whom the present high school was named, served on Saint James’ vestry for nearly 70 years.