Seal of the Society for the Propagation of the Gospel in Foreign Parts chartered by King William III, 1701.

Saint James was created by the missionary vision of the Society for the Propagation of the Gospel in Foreign Parts (SPG). The lofty ideals of SPG were to provide Christian ministry to British people overseas and to evangelize the “New World.”  In 1744 the Rev. Richard Locke, a circuit-riding priest from England funded by SPG, served many communities in the region. With a small but influential group of colonists, he oversaw the formal creation of a congregation of the Church of England, which was to become Saint James. 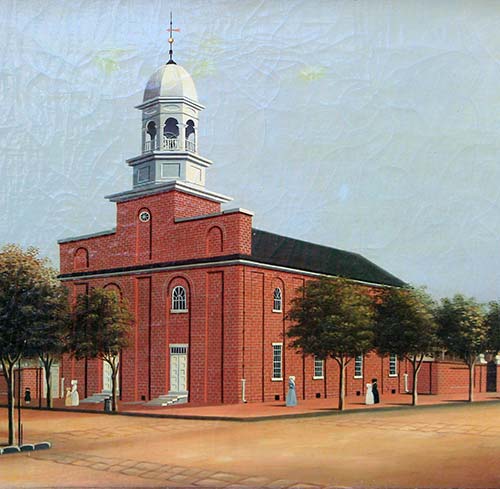 Funding a new church was a challenge in colonial America. In Lancaster, German and Swiss settlers outnumbered British settlers. The earliest congregation met in the first county courthouse on Penn Square before wealthy members helped fund a stone church on the corner of Duke and Orange Streets in the 1750s.

In 1761, money raised through two lotteries paid for the steeple. Parishioners continued to pay a pew rent to worship in the church until 1929! Nurturing a new congregation was also difficult. Before the American Revolution, Saint James clergy were SPG missionaries who had to travel to Britain to be ordained as there were no bishops in the colonies. Each priest served many churches across Pennsylvania.

Following the American Revolution, the great challenge was how to become a separate American branch of the Anglican Communion (the English Church). Saint James parishioners and clergy, especially the Revs. Joseph Hutchins and Joseph Clarkson, played an active part in the formation of the new Protestant Episcopal Church of the United States. By 1789, the American Episcopal Church was self-governing, with its own bishops and Book of Common Prayer, while remaining in relationship with the “mother” church in England. The Episcopal Church, however, still had to grapple with the reality of racial, social, and economic divisions in the city and across a fragile nation. 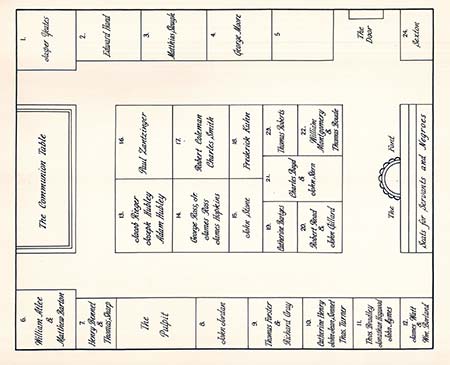 Seating plan of assigned pews in the original Saint James Church in 1791. Reproduced from the Vestry minutes book.

From its foundation, people of African descent, whether free or enslaved, worshipped at Saint James. Seating, however, was segregated. Circa 1820, some African-American members helped to establish a separate church, known until the late 1840s as Saint James African Church. This congregation adopted the name Bethel African Methodist Episcopal Church later in the nineteenth century, and continues to serve the Lancaster community today. In 1853, Rev. Samuel Bowman founded a “free” church without pew rents—St. John’s Episcopal Church—said to be the first free church in the Diocese of Pennsylvania. His example led his successor, the Rev. Jacob Isidor Mombert, to build Saint James Chapel (1869-1906) in southeast Lancaster with free seats, a sewing school and a Sunday School.