Since 1744 the people of Saint James have worshipped God and served their community. Before building their own stone church, the congregation met in the local courthouse. Early clergy were British missionaries funded by the Society for the Propagation of the Gospel. Despite being boarded up during the Revolutionary War, due to conflict between a rector loyal to the British Crown and a congregation of prominent patriots, church life resumed in 1783.

Since that time Saint James has nurtured many national and local leaders and pioneers. Eleven former rectors and members of the parish have become bishops. Bishop Charles Inglis, a priest raised from the parish, became the first colonial bishop of the Church of England as Bishop of Nova Scotia in 1787. Joseph Clarkson was involved in adapting the English Book of Common Prayer for use in the post-revolutionary Episcopal Church. William Augustus Muhlenberg, who called himself both “evangelical and catholic,” helped reinvigorate liturgical and spiritual life of the church through writing hymns and promoting the use of weekly Eucharist and daily offices. In 1977 Elizabeth W. Myers was the first woman ordained a priest in the Diocese of Central Pennsylvania.

Saint James clergy and people have played a significant role in the development of education in this country. Muhlenberg was responsible establishing in Lancaster the second public school district in the state. The movement for state teacher training colleges was headed by parishioner Dr. Thomas Burrowes. Muhlenberg was also the founder of the church school movement which created many prestigious Episcopal boarding schools. Among those church members who were inspired by him were: Henry Coit, first rector of St. Paul’s School, Concord (NH); John Kerfoot, rector of St. James School, Hagerstown (MD); and Harriet Lane Johnston (niece of President James Buchanan) who endowed St. Alban’s School, Washington D.C. The great educationalist J.P. McCaskey (after whom the city’s high school is named) served on the vestry for over 60 years. 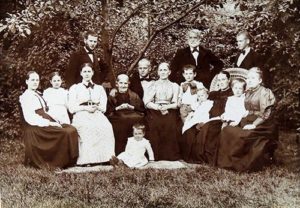 In each generation the laity of Saint James has responded to those in need in the local community. In the 19th century the church established a home for the elderly and an orphanage for children. For more than 30 years the breakfast program, known as Anchorage, fed thousands of people every year. Currently Saint James partners with Head Start to host a preschool in the parish house.

The church is one of the finest in Pennsylvania. It has a long association with music and the arts inside and outside its buildings, whether its rich choral tradition deepening worship; the quality of its stained glass windows and warmth of its Moravian tiles; or the combination of ancient graves and majestic trees in the most historic churchyard in downtown Lancaster.