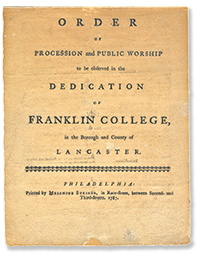 Joseph Hutchins is one of the first trustees of Franklin College

The Rev. Joseph Hutchins was named a trustee of Franklin College in its charter of 1787 and elected professor of English language and literature. The mission of Franklin College was to educate the German youth of central Pennsylvania and help in the diffusion of “knowledge through every part of the State, in order to preserve our present republican system of government, as well as to promote these improvements in the arts and sciences which alone render nations respectable, great and happy.”

At that time, Lancaster was largely German-speaking, but English was the official language of the community. Hutchins was unpopular with many German speaking pastors as, on the occasion of the opening of the College, he gave an address in Trinity Lutheran Church in which he strongly advocated the necessity of learning of English for all American citizens.