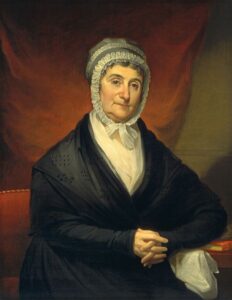 Ann Coleman presents a silver flagon to the church

This gift seems to have been the earliest gift of communion silver to Saint James. Ann was the daughter of James Old, an early ironmaster, and was married to Robert Coleman, who was at that time the most successful ironmaster in Lancaster County. Robert was an influential vestryman and major benefactor of Saint James. While he unsuccessfully opposed the Rev. William Augustus Muhlenberg’s plans to hold evening services at the church, he seems to have thwarted the romance between his daughter Sarah and Muhlenberg.