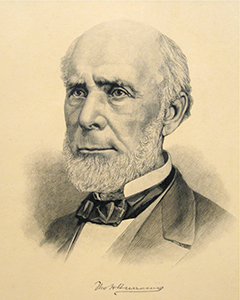 Thomas Henry Burrowes was one of Saint James’ most famous parishioners. He was one of the founders of the public school system of Pennsylvania and championed the cause of public education throughout his life. He held many important public offices including: Secretary of the Commonwealth of Pennsylvania; Superintendent of the Common Schools; and President of Pennsylvania State University (1866-71). He also found time to serve on the Saint James vestry and became the ninth Mayor of the City of Lancaster, PA.

Burrowes effect on education was extensive. He drafted the 1857 Normal School Law which led to the creation of Millersville University and the PA state university system of today. He also founded and edited the influential Pennsylvania School Journal (1852-1870).

His monument in Saint James’ Churchyard reads, “He gave his best; his giving was princely; his work has been grandly cumulative and will be so through the ages. To no man now living does Pennsylvania owe so great a debt of gratitude.”