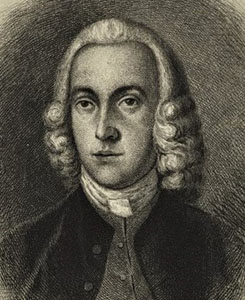 George Ross, the son of an Anglican clergyman, settled in Lancaster in 1751 and soon served as a vestryman and churchwarden. A lawyer by profession and initially a Tory, he served as Crown Prosecutor for Cumberland County for 12 years and was elected to the provincial legislature in 1768. There, his sympathies began to change, and he became a strong supporter of the colonial assemblies in their disputes with the British Parliament.

Ross joined the Lancaster Committee of Correspondence in 1774 and was elected to the Continental Congress in 1774, 1776, and 1777. He also served as a colonel in the Pennsylvania militia (1775–1776). George Ross was the last of the Pennsylvania delegation to sign the Declaration of Independence.

Later he became vice president of the Pennsylvania Constitutional Convention and was the Judge of the Admiralty Court of Pennsylvania in 1779. He died the same year and is buried at Christ Church Burial Ground in Philadelphia.