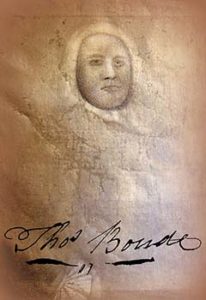 Parishioner involved in one of the earliest recorded uprisings against slavery

Major Thomas Boude, a lumber merchant and former US Congressman, purchased the young boy Stephen Smith as an indentured servant from the Cochran family near Harrisburg and took him to live and work in Columbia, Lancaster County. When Smith’s mother ran away from the Cochran’s and Mrs Cochran attempted to seize her, the resistance and outcry of the Boude household, brought Thomas to the rescue. To avoid further incident, he purchased Mrs Smith out of bondage. Later when Stephen came of age, he purchased his freedom too and helped establish him as a lumber merchant. Smith became an active supporter of the Underground Railroad movement and a minister in the African Methodist Episcopal Church. Click image to enlarge.