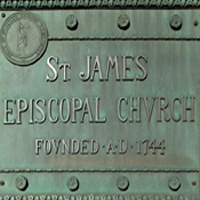 Although he did not know it, Thomas Barton’s last public service as rector of Saint James was to be on Sunday, June 23 1776. With many in the congregation ardent patriots, after the American Declaration of Independence, he could no longer conduct services using the Book of Common Prayer.

His ordination vows had included an oath of allegiance of the British Sovereign as head of the Church of England and to only use the Book of Common Prayer which included prayers for King George III and the royal family. As a result, Saint James was closed, in the words of Barton “to avoid the fury of the populace”.

In 1778, Jasper Yeates, the treasurer, paid to have the windows boarded up and padlocks for the gates and belfry doors.