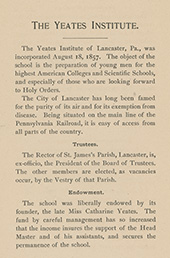 A new preparatory school for boys

The Yeates Institute of Lancaster, a preparatory school for boys was among the first boarding schools of the Episcopal Church. The school was endowed by Miss Catherine Yeates in memory of her father, the Hon. Jasper Yeates, Judge of the Supreme Court of Pennsylvania and warden of the Church for many years. The school became widely known for its classical training of boys. It was originally situated on the corner of Chestnut and Charlotte Streets. Click image to enlarge.