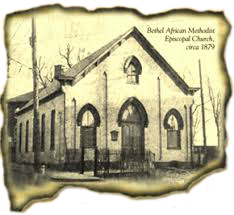 In 1817, fifty free people of color, including Saint James worshipers, decided at the home of James and Elizabeth Clendenin to establish a separate church for people of African descent in Lancaster. They solicited support from the African community as well as members of Saint James and Trinity Lutheran churches. The first house of worship built on Strawberry Street by 1821 was known until the late 1840s as the Saint James African Church. The name Bethel African Methodist Episcopal Church was adopted later in the 1880s, and it remains Lancaster County’s oldest predominantly black congregation.