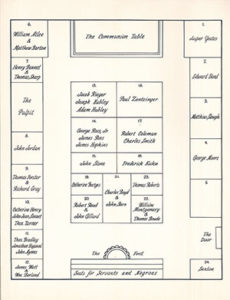 Like most Episcopal churches at this time, the expenses of running Saint James were largely met by wealthy families paying an annual rent to sit in an assigned pew. This plan shows the location of each pew in 1791. Social prominence and racial segregation is clearly shown. The wealthiest men sat front and center with their families. Class and racial segregation is demonstrated by designated seating at the back of the church for ‘servants and negroes’.

From its foundation, people of African descent worshipped at Saint James both as enslaved and ‘free’ people. Some of our most famous parishioners held people of African descent in bonded servitude. The list of such parishioners is very long but includes: Robert Coleman, the Grubb family, Edward Hand, George Ross, Edward Shippen, Jasper Yeates and Paul Zantzinger. Many others indirectly profited from an economy built on the nightmare of slavery and the slave trade.