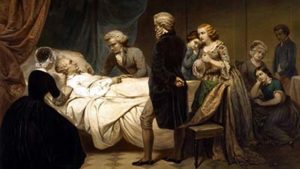 On December 14, 1799, George Washington—General, President and an Episcopalian died. The Pennsylvania Legislature, then meeting in Lancaster, the capital of the state, designated January 7 as a “day of mourning and respect for the memory of the illustrious Washington.

Under the orders of Major General Edward Hand, Washington’s comrade in arms and vestryman of Saint James, there was a military procession, joined by politicians, clergymen and Masons as well as other citizens, from the court house to Saint James. The Rev. Joseph Clarkson gave the sermon and the empty coffin, which had been carried in the procession, was left in the church as a sign of respect for Washington.