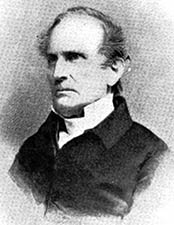 The Rev. Samuel Bowman, whose long ministry expanded both Saint James vision of evangelization and mission to those in need, became co-rector at the age of 27 and rector on the death of Dr. Clarkson in 1830. He also knew personal suffering, experiencing the death of his 28 year old first wife, Susan and the early deaths of two children. Bowman’s second wife was Harriet, daughter of Joseph Clarkson. His two wives are buried near his grave (carved with a mitre) in the churchyard.