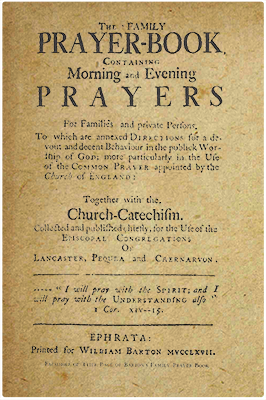 The Rev. Thomas Barton’s prayer book was based on the Church of England’s Book of Common Prayer (1662) and was intended to foster private prayer in the homes of his three congregations: Saint James Church, Lancaster; Saint John’s Episcopal Church, Pequea (now Compass); and Bangor Episcopal Church, Churchtown. He believed that private prayer was the best preparation for public prayer at church and that parents lacked knowledge and confidence to make prayer a regular part of family life. Among the prayers in his book were some specifically designed to be used by children, young people and servants. This book was printed by the Cloister Press at the Seventh Day Baptist Community, Ephrata.