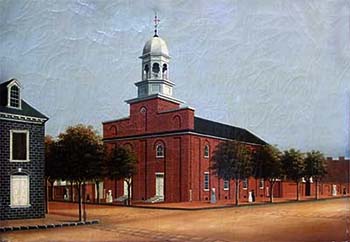 The ministry and popularity of the rector, Samuel Bowman, drew more people to Saint James which required more seats. The church was enlarged according to the plan produced by James Damant, the organist. The east end of the church was extended about 15 feet and above the altar was built a large round-topped window. On the wall under this window were the Creed, the Lord’s Prayer and the Ten Commandments in gold letters on dark panels. A marble slab was placed on the altar. The gallery, where people of lower income sat, consisted of 2 ranges of pews and one broad aisle. During construction the congregation worshiped at the Moravian Church.